How Are Chemicals Regulated in China by Lists

Having all chemical substances listed on Chinese existing substance inventory IECSC does not mean compliance. Lots of existing chemicals are also subject to registrations, reporting and import/export control. Chinese chemical regulatory system is very complex mainly because too many authorities are involved. An easier way to understand how a chemical is regulated in China is to look at which type of chemical it belongs to and which list it is on. In this article, we will give you an introduction to the definition of different types of regulated chemicals in China and how they are controlled. 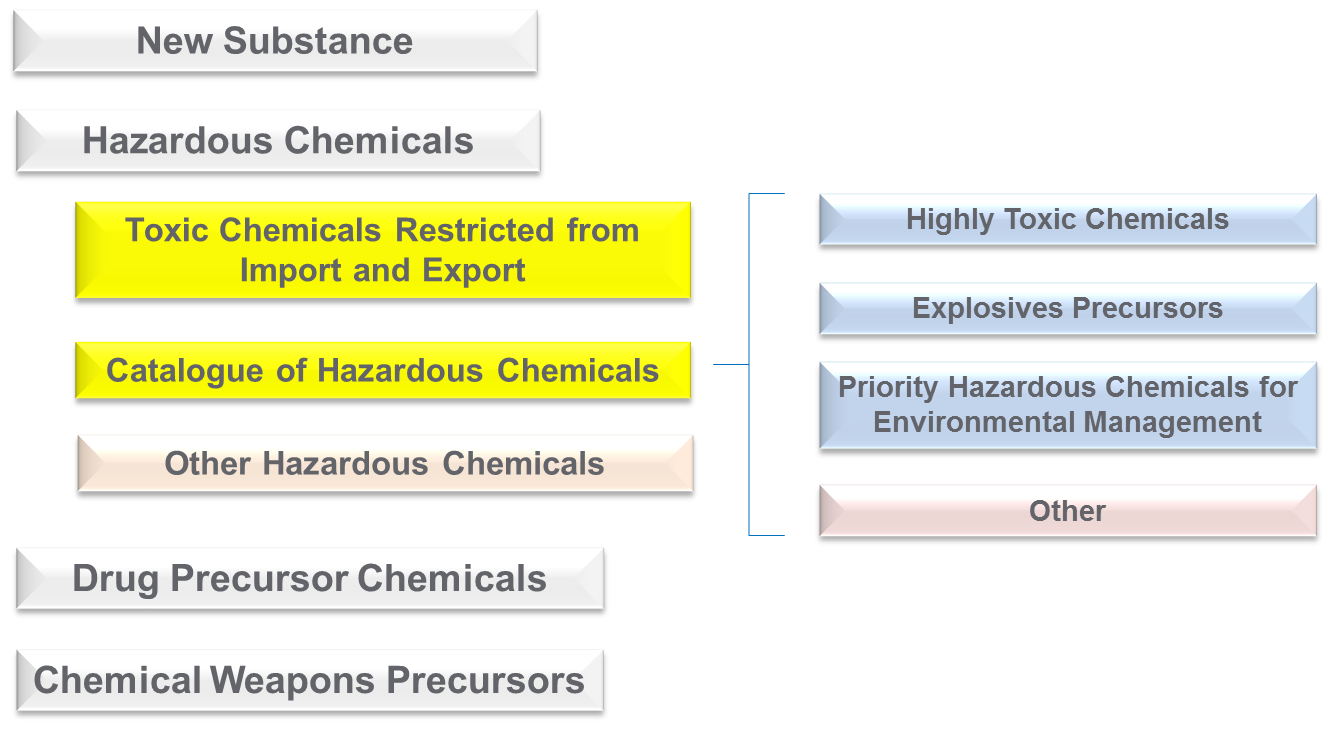 A new substance is defined as a substance other than those listed on the Inventory of Existing Chemical Substances Produced or Imported in China (IECSC). China implements a pre-market notification system for new substances.

Hazardous chemicals are mainly controlled by State Council Decree 591 Regulations on Safe Management of Hazardous Chemicals issued in 2011 and many department rules.

In Decree 591, hazardous chemicals are defined as highly toxic chemicals and other chemicals which are toxic, corrosive, explosive, flammable and do harm to human body, facilities and environment. All chemicals meeting GHS hazard classification criteria may fall within its scope.

In addition to the license requirements, Decree 591 require businesses who handle hazardous chemicals in China to submit HazChem registrations and provide SDSs and labels prepared in accordance with relevant China GHS standards.

Highly toxic chemicals are defined as chemicals with high acute toxicity (usually GHS Acute Toxicity Category 1). Those chemicals can be lethal even in very small quantities. If illegally used as poisons, they could pose a big threat to public security. Examples of such chemicals include sodium cyanide.

The Ministry of Public Security (MPS), the principle police authority in China, used to maintain a separate List of Highly Toxic Chemicals. This list has recently been incorporated into the Catalogue of Hazardous Chemicals (2015). Highly toxic chemicals are now marked as “剧毒” in the note column of the Catalogue.

Highly toxic chemicals are subject to additional security and reporting requirements on storage, sales and purchase.

Explosive precursors are certain chemicals which can be used in the illicit manufacture of explosives. Those chemicals need to be controlled to reduce the risks of misuse by terrorists and protect public security.

Companies who intend to export or import toxic chemicals on the “catalogue of severely restricted toxic chemicals” shall apply for custom clearance notification certificate from the Solid Waste and Chemical Management Center of China MEP (MEP-SCC) prior to export and import.

Drug precursors are certain chemicals which can be used in the illicit manufacture of narcotic drugs and psychotropic substances. Examples of such chemicals include acetic anhydride, acetone, hydrochloric acid, and sulfuric acid.

China has ratified the UN Convention on Drug Precursors. Precursor chemicals are subject to strict license requirements on production, sales, purchase and transportation in China. In addition to that, China implements a pre-import and pre-export notification system for dual-use precursor chemicals.

China has ratified the Chemical Weapons Convention (CWC) since 1997 and imposed strict license and declaration obligations on companies who produce, trade, use, import and export controlled chemicals.