Derived No-Effect Level (DNEL) is defined as the level of chemical exposure above which humans should not be exposed.  In human health risk assessment, the exposure level of each human population known to be or likely to be exposed is compared with the appropriate derived no-effect level (DNEL). The risk of a chemical substance to humans can be considered to be controlled/acceptable if the exposure levels estimated do not exceed the appropriate DNEL (i.e, exposure estimate/DNEL<1). In EU, DNELs shall  be communicated to downstream users via extended safety data sheets (SDS) if they are available.

The DNEL (oral route, systematic effects) of methanol for general population is 0.088 g/kg bw /day. It means that if an adult person (assuming 60kg body weight) intakes less than 5.28g (0.088*60) methanol per day by oral route, the risk of methanol causing ocular toxicity/vision damage can be controlled. Do you know how important DNEL is now?

The picture below shows you the relationship between LD50, LOAEL, NOAEL and DNEL on a typical dose-response curve. 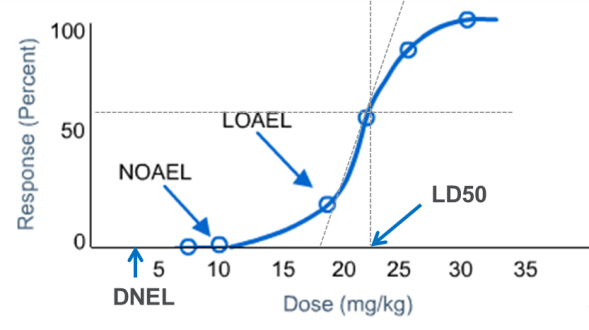 The table below is an example of how to divide NOAEL by assessment factors to get Derived No-Effect Level (DNEL).

In above case, the lowest DNEL (0.1mg/kg bw/day) will be used for risk assessment. If an adult (assuming weight is 60kg) intakes 12mg of a chemical substance per day, the estimated exposure (external dose per body weight) will be 0.2mg/kg bw/day. Since the exposure estimate is greater than DNEL, which will lead to a RCR>1, the risk will not be acceptable.

How Many Derived No-Effect Level (DNELs) You Need to Calculate?

The table below summarizes the number of DNELs you may need to derive.

It is not always necessary to derive DNELs for all mentioned populations or routes or exposure duration. Depending on the exposure pattern and health effects, only relevant DNELs have to be derived. It may not always be possible to derive DNELs for all health effects. For many local effects (irritation), DNELs cannot be derived. This may also be the case, for example, for mutagen/carcinogen where no safe threshold level can be obtained. In these cases a semi-quantitative value, known as the DMEL or Derived Minimal Effect level may be developed.

To understand how many DNELs you actually have to derive, you need to understand the use of your substance and its exposure pattern (population, route, duration of exposure) as well as the type of its adverse health effects (local or systemic effects).

Depending on the exposure scenario, the exposure duration can vary from a single event to an exposure for several days/weeks/months per year, or it might even be continuous (as is, e.g., the case for humans exposed via the environment). Since the duration of exposure will often have an impact on the effect(s) that may arise, DNELs may have to be derived for various exposure duration.

Depending on the substance and the type of adverse health effects, DNELs may have to be established for systemic effects, for local effects or for both.

For systemic effects, the units of DNELs are mg/m3 for inhalation, and mg/kg bw ormg/kg bw/day for oral and dermal exposure.

For local effects, the units of DNELs are mg/m3 for inhalation; and for dermal exposure: mg/cm2 skin, mg/person/day (e.g., calculated based on the deposited amount per cm2 times the actually exposed body area), or a measure of concentration (% or ppm)

Relevant DNELs are often named in the following way.

Example 1: A solid substance (in powder form) is only used as an intermediate in a chemical plant. Workers may be exposed to the substance via inhalation or dermal contact. Studies have shown that the substance has no acute health effects  (including acute toxicity, irriation or sensitization). In this case, only the following 1 relevant DNEL needs to be derived.

Example 2: A liquid substance (non-volatile) is used as a dispersing agent in a cleaning product. Both workers and consumers may be exposed to the substance during its life-cycle stage (production, formulation and use). However, it is unlikely for workers and consumers to inhale the substance because of its low vapor pressure. Studies have shown that the substance has no local health effects (including irriation or sensitization). In this case, only the following relevant 3 DNELs need to be derived.

Example 3: Under REACH, the following relevant DNELs have been derived for ethanol based on possible exposure pattern and the health effects of ethanol (reference). Because ethanol has no adverse local effects, the DNELs for local effects do not need to be derived.

The picture below summarizes the procedure for deriving DNELs in 4 steps.

Among all 4 steps, step 2 modification of dose descriptor to correct starting point is very important. The goal is to get the corrected N(L)OAEL which matches real exposure conditions and which is in the right unit. For example, you only have an oral NOAEL (in mg/kg bw/day) from a rat study and you need to convert it to NOAEC (in mg/m3) so that you can derive DNELs for workers for inhalation route (in mg/m3), you must learn how to get corrected dose descriptors.

Read more: how to modify the dose descriptor to correct starting point

How to Choose Appropriate Assessment Factors?

Assessment factors are used to address the differences between the experimental data and the human situation, taking into account the following uncertainties in the extrapolation procedure.

Note: Allometric scaling factors should not be applied in cases where doses in experimental animal studies are expressed as concentrations (e.g., in mg/m3 in air, ppm in diet, or mg/l in the drinking water) as these are assumed to be already scaled according to the allometric principle. However, once the concentration (e.g., ppm in diet) has been converted into a dose (e.g., mg/kg/day), an allometric scaling factor has to be used to derive DNELs.

Assume that we need to derive DNELs for a chemical substance which is only used in industrial settings/factories (no exposure to the  general population). The substance has no local effects or acute health effects. Only NOAEL values from 90d repeated dose toxicity studies and reproductive toxicity studies (rat, oral route) are available. The table below is an example of how to derive worker-DNELlong-term for dermal route-systemic effects. In the end, the lowest DNEL (0.2mg/kg bw/day) will be used for risk assessment for dermal route.

Good job. You have learned what DNEL is, how many DNELs you need to derive, how to choose assessment factors and how to derive DNELs. Please subscribe our newsletter to keep updated of our new articles.

"It does not matter how slowly you go as long as you do not stop. "
– Confucius