In toxicology, point of departure (POD) is defined as the point on a toxicological dose-response curve established from experimental data or observational data generally corresponding to an estimated low effect level or no effect level. It marks the beginning of extrapolation to toxicological reference dose RfD or reference concentration RfC.

US EPA defines RfD or RfC as follows.  [Note: In EU, RfD may be called derived no-effect level (DNEL).] 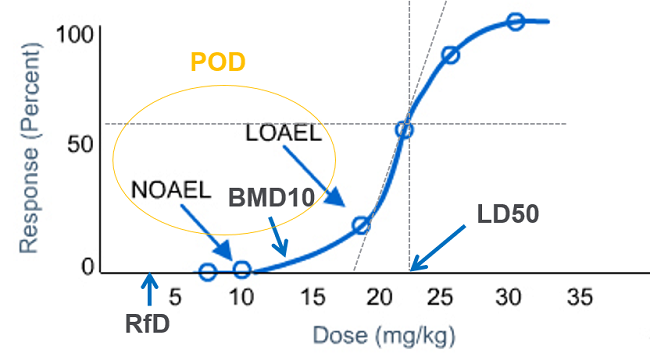 How to Use POD to Calculate RfD or RfC

RfD or RfC values can be calculated by dividing the point of departure (i.e, chronic NOAEL or BMD) with corresponding uncertainty factors (UF). When deriving acute reference dose (ARfD) is necessary, NOAEL from short-term or single dose toxicity studies shall be used. In case of multiple NOAELs for different effects and specifies, the lowest NOAEL value will be chosen as the point of departure. Sometimes, you have to modify the point of departure first before using the equation below.

Uncertainty factors and modifying factors are used to address the differences between the experimental data and the human situation, taking into account the following uncertainties in the extrapolation procedure.

The table below summarizes standard uncertainty factors used by US EPA for risk assessment [Reference].

When Is Modification of Point of Departure Necessary?

Modification of point of departure is necessary if there are any differences below between exposure routes and between experimental animals and humans.

It should be noted that modification is not appropriate in cases where the dose descriptor is based on human data or where human exposure is evaluated based on biological monitoring data.

Read more: How to Modify Dose Descriptors to A Correct Starting Point

Which POD Is Better: NOAEL or BMD?

Both NOAEL and benchmark dose BMD can be used as the point of departure to derive RfD in USA or DNEL is EU. The BMD approach is now EPA’s preferred approach and is fast becoming the world’s standard for dose-response analysis. The BMD approach has distinct advantages over the NOAEL approach in that the modeled benchmark dose (BMD05 or BMD10) reflects the shape of the dose–response curve and is less effected by the choice of experimental concentrations. However, the BMD approach requires a robust data set and additional knowledge of statistical modelling.

In our next tutorial, we will give you an introduction to the definition of benchmark dose and how to use EPA's benchmark dose software (BMDS) to calculate BMD05 and BMD10, which will later be used as the POD to derive RfD values.